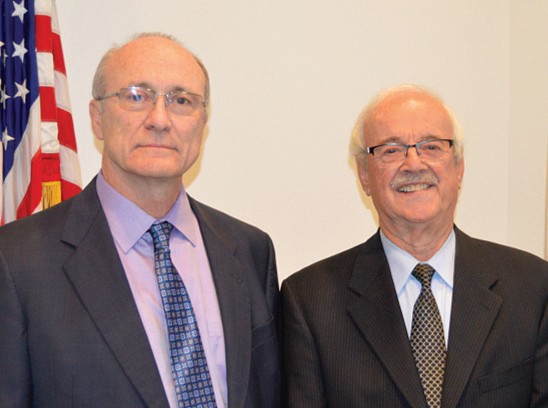 TAKING THEIR SEATS—Mike Teasdale and Rob Collins are the newest members of the Ventura County Board of Education. The board meets at 6 p.m. on the fourth Monday of the month. Courtesy photo

The Ventura County Board of Education installed two newly elected trustees at its Dec. 10 meeting in Camarillo. Rob Collins and Mike Teasdale were formally sworn in as trustees following their election victories in November.

Collins had previously served as a trustee on the county board from 2002 to 2004.

More recently, he was a trustee for the Simi Valley Unified School District Board of Education.

He has many years of experience as a classroom teacher and school administrator.

He was honored as the Simi Valley Teacher of the Year in 1998 and continues to teach political science at the College of the Canyons in Santa Clarita.

Teasdale is a former elementary and high school teacher and university lecturer. He also worked for 12 years as senior director for operational excellence and strategy at Baxter International, a major medical products company.

Since his retirement, Teasdale has been a community volunteer. He is the co-chair of the Social Justice Fund for Ventura County, which provides grants to Ventura County youth organizations.

Rachel Ulrich, who represents trustee area one, and Ventura County Superintendent of Schools Stan Mantooth, who also serves as the board’s executive officer, were also sworn in, marking the beginning of their new four-year terms in office.